Leadership and Antisocial Behavior in Business 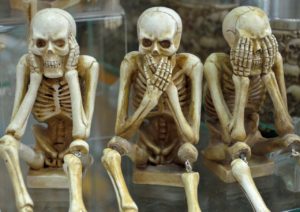 When I was starting to get larger consulting projects in the mid 1990’s, I got burned, big time by my failure to understand sleazy players and hidden agendas in bureaucratic organizations. The lessons were painful. Twenty years later, I still get a little pissed off about my utter stupidity and clueless blundering back then. I thought I was a smart man-of-the-world, but I was really just a Pollyanna when it came to dealing with the smarmy, self-serving individuals one routinely encounters in large organizations. Back then, I believed that everyone’s mission was to work in the best interest of the organization. I have been sorely disabused of that notion ever since.

You know who I am talking about: the pathological liars, credit takers, sycophants, narcissists, sociopaths, passive aggressives, and borderline personalities that can make your job extremely difficult. Every large organization has a whole posse of these people. If you allow it, they will make your life a living hell. Antisocials are all too often enabled and empowered by weak managers and executives.

In small businesses, antisocial behavior tends to be exposed and eliminated quickly. In larger organizations though, antisocial personalities often grow and flourish like noxious, alien superweeds. They can topple organizations, destroy workplace morale, and chase away your best and brightest staff members. They can even end your career. You can’t spray them with Roundup, but excellent leadership can alleviate or eliminate the problem. Unfortunately, there seems to be a dearth of strong leaders who are skilled at managing these dysfunctional personalities in the workplace.

It took me about ten years to learn to identify and handle the full spectrum of personality disorders that one encounters in the business world. Maybe I am a slow learner. I rarely get completely blindsided anymore, but I am definitely still learning. Let’s take a look at some of the dysfunctional personalities and behaviors one encounters in bureaucratic organizations and then discuss a few solutions.

Every large organization has at least one of these people. In a meeting, he or she will remain silent or tacitly agree with the direction of an open discussion with colleagues, executives and stakeholders. As soon as the meeting is over, Grima makes a beeline to the executives and board members and begins whispering in their ears. Open discussions and symmetrical information are anathema to Grima because he has no ideas or solutions. His only approach to maintaining power or status is the personal and professional destruction of the people he perceives to be a threat. Maddening and disgusting! Strong executives shut these people down immediately by demanding that they voice their concerns in the appropriate public forum. Weak leaders allow these people to grow like a malignant cancer and spread through the organization. If you aren’t shutting this type of behavior down, Grima will eventually bring you down. Look at what happened to King Theoden!

Effective Leadership Vs. The Weapons of Cowards

Gossip and innuendo are the weapons of cowards but they can be incredibly effective. Strong leaders are never swayed by malicious insinuations and baseless accusations. Effective leaders investigate if necessary, take appropriate action and then shut the gossip down. I prefer the approach the Volturi took to false accusers in the Twilight Saga, but such tactics are generally frowned upon in the business world. In the hands of a weak leader, groundless gossip ruins careers and reputations. Don’t be a weak leader.

One excellent executive leader with whom I worked always addressed accusations and innuendo by investigating immediately. He began by pulling out his pen and notebook and getting the facts from all parties involved, remaining neutral the entire time. He never made assumptions and therefore never ended up looking the fool. When he completed his investigation, the only person whose credibility was damaged was the malicious accuser.

One thing I have learned from 23 years of consulting work in political organizations is that everyone has a hidden agenda. I try to flush these out to the best of my ability during consulting engagements, but they are sometimes difficult to identify completely. Hidden agendas can present overwhelming obstacles to projects that involve significant process improvement and change. Too many people are heavily invested in old, inefficient methods and they hold power as a result of the dysfunction. Effective leaders expose hidden agendas and identify the real issues at hand.

Refusal to put it in writing or e-mail

Beware of those who drop by your office “for a discussion” or those who only want to discuss critical issues over the phone rather than by e-mail. Yes, many issues are better handled in a personal meeting rather than by e-mail, but it is essential to establish a paper trail for these discussions. Don’t let someone with ulterior motives hijack or misrepresent your hard work and message. If you are dealing with someone who wants to make sure there is no trail, document the discussion and e-mail back a summary of the meeting copying appropriate personnel. Stop this behavior immediately.

Consultants are always one step away from being fired so I have learned to put everything in writing. I cc at least 2 people in an organization on every communication and I state this practice in my contracts. I learned this lesson the hard way, though. At one point, I was reporting to a specific person on a Board. At the time, I didn’t understand that he had a hidden agenda and my failure to communicate to multiple board members allowed him to hijack the message and bury some really egregious practices that should have been exposed to fresh air and sun. “We don’t air our dirty laundry in public” he told me. Unfortunately, that’s the only way to get your dirty laundry clean.

A friend of mine was recently dismissed from an executive position because of her failure to document sufficiently and go over people’s heads to resolve problems. She should have known better but her failure to document put her in the crosshairs. Aggressively exposing and documenting the problems would have protected her but she trusted the wrong people. If you are working for an organization whose management rewards or buries incompetence, corruption and malfeasance, you should either be looking for another job or preparing for combat. If you choose the second option, you might win or you might lose. The worse that can happen is that you’ll get fired, but at least your integrity will be intact.

Long ago, I made the mistake of assuming that everyone laid their cards on the table. That’s the way I was raised. In the public sector, all the agendas are supposed to be public anyway. Government works better in the open but too many of the players favor back room deals that never address the root cause of problems.

Two can keep a secret if one of them is dead. Never get involved in workplace conspiracies. People who conspire against others in your organization will do the same to you if the opportunity presents itself and it will damage your credibility and integrity. Credibility and Integrity are all you have.

Examine Every Statement and Supposed Fact

I once took a course from GAP, International, Breakthrough Thinking Intensive. The gist of the training was to learn to examine every statement and assumption and ask if it was really true. It was a great course, but really ended up being a business version of skills I had learned from my best professors in graduate school. Every statement and assumption must be proven before you accept it as fact. I wish all the executives and managers I have encountered in roughly 200 organizations had this skill. All too often, we believe things that have no basis in fact.

In 1982, Robin Warren and Barry Marshall postulated that Helicobacter pylori, rather than stress, was the primary cause of gastric and duodenal ulcers. They were ridiculed and nearly run out of the profession for that suggestion, but their theory has proven to be true and they were awarded a Nobel Prize for their work in 2005. Sometimes the truth takes a while to get out.

My approach to business problems and antisocial people is to simply tell the truth in plain language and remain steadfast. Deal with facts and never let personal considerations enter into the fray. Truth is the best defense against the antisocial personalities you will encounter in the workplace. They hate it. It’s like throwing water on the Wicked Witch, or dragging a vampire out into the sun. Antisocial scoundrels melt or burst into flames when exposed to truth. Put everything out there in the open where everyone can see it.

My father was a small business owner – bars, restaurants, and real estate. In his businesses there were never hidden agendas and everything was always out in the open. I thought the whole world worked that way and had a rude awakening as an adult. My parents raised my sisters and I to always tell the truth. There was only one exception to that which he chastised me about. When he found out that I disclosed some personal information to a military recruiter, he yelled “$%^( &$@#!  When I taught you to tell the truth, I didn’t mean for you to tell it to anyone from the federal government!” I guess I had missed that lesson.

In spite of his teaching, I found that the truth worked for me, even in the Army. I did two things in the army that one is never supposed to do. I volunteered, and I fessed up immediately if I made some sort of huge mistake. These worked to my advantage and I believe they will work to yours as well.

If you want to talk about business practices or technology in your organization, send me an e-mail at jmorgan@e-volvellc.com and let’s talk!

One thought on “Leadership and Antisocial Behavior in Business”